BLACK MAP defines "Melodoria" as the phenomenon of something arising from nothing; the way new art is willed into existence. A void gives way to an emergent state of being, seemingly from out of nowhere, and suddenly offers strength and resilience to those it touches. The trio chose to call their new album Melodoria because, while its themes are rich with dystopian dread and postmodern chaos, this music relentlessly energizes and inspires.

Produced by Black Map with Zach Ohren (Machine Head, The Ghost Inside, Set Your Goals), mixed by Beau Burchell (Saosin, Senses Fail, The Bronx), and recorded at various studios in the band's native Bay Area, Melodoria is a rich offering that's heavy in both sound and spirit.

The music of Black Map carries an old-school honesty, introspection, and sincerity that's absent from much of the current rock landscape. The albums they've made are both massive and well-produced, but never sound as though programmed algorithms crafted them.

Black Map is reminiscent of trailblazers like Deftones, Quicksand, and Helmet, who adeptly straddle the line between cerebral and accessible. …And We Explode (2014) rewarded their shared commitment to authentic artistry and purity of intention. In Droves (2017) furthered the trio’s incursion into rock radio without sacrificing and ounce of musical integrity. New fans steadily join the Black Map faithful's ranks via the band’s performances on tours with bands like Chevelle, Bush, Pop Evil, Circa Survive, and Highly Suspect, and at major U.S. rock festivals. 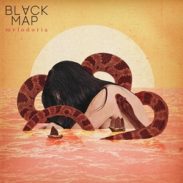