Triumphant main stage performances in recent years at Download and Bloodstock festivals following the release of Judas have seen the band hungry to return. “It’s been over three years since we had the honor of playing in front on our UK fans, who were the first in the world to fully embrace us 15 year ago and show North America what they were missing! As a result, we’ve always held England, Scotland and Wales near and dear to our metal hearts. And it’s been just as long since we’ve experienced the FOZZY lunatics in Ireland, who have consistently been one of the craziest and best countries for us to play in! So we in FOZZY are warning all of you now…get ready to rock harder than you’ve ever rocked and drink more pints than you’ve ever drank, because FOZZY is coming back to destroy your town! We all deserve a great time and we don’t fuck around with the responsibility of providing that for all of our friends overseas,” says singer Chris Jericho.

In May they dropped their breathtaking video for their first new song in two years, “Sane,” which hit 1M views in its first two weeks.  This first of its kind video was filmed on the longest wooden rollercoaster on the planet today!!  Get a first-hand view of the madness as the band literally defies gravity, by reaching top speeds of 70 mph and terrifying drops of 154 feet, rocking to the crushing new track every track of the way!!  It’s an edgy, heart-stopping thrill ride that represents both the power and physicality of Fozzy’s music, along with the bombastic nature and “who gives a shit” attitude of their live show. Watch the music video for “SANE” HERE and purchase/stream the track HERE.

After touring the world with the likes of Metallica, Kiss, Iron Maiden, Avenged Sevenfold, Shinedown and building a loyal fanbase for the better part of twenty years, Fozzy is the epitome of what a great rock n roll band should be: catchy, groovy, hooky, sweaty and most importantly, an AWESOME F**KIN TIME! With five consecutive TOP 30 singles, Fozzy is steadily becoming one of the most successful bands on Modern Rock Radio. It was the band’s 2012 release Sin And Bones, which featured the hit single “Sandpaper” (over 4.5 million views on YouTube), that found the band reaching a level of legitimacy that drew a mass audience to drink in their trademark heavy melodic groove. The album eventually reached #143 on the Billboard Top 200 Chart, but it was their next album, Do You Wanna Start A War (produced by Ward), released in the summer of 2014, that really blew the door open, debuting at #54 on Billboard and giving the band their first top 30 radio single in "Lights Go Out”, which was blared in sports arenas nationwide. Then, in May 2017, came the band’s breakthrough massive smash song “Judas”, expected to achieve Gold Record status by the end of 2021. The aforementioned title track spent 5 weeks at #1 on the highly influential 'Big Uns Countdown' on Sirius/XM's Octane channel, amassed over 47 million views for its video on YouTube, cracked the Top 5 on the US Rock Radio Chart and is still heard by millions of fans worldwide weekly on the TNT Network’s hugely popular “AEW Dynamite” program. The follow up single “Painless” hit number 9 on the charts (almost 10 million views on YouTube) with “Burn Me Out” peaking at number 18 and “Nowhere To Run” becoming Fozzy’s third Top Ten hit in 2020. 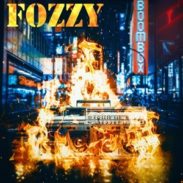