Following the group's 1985 formation, Guns N' Roses injected unbridled attitude into the burgeoning Los Angeles rock scene. They went on to captivate the entire world with the 21st July, 1987 release of Appetite For Destruction, which remains the best-selling U.S. debut album ever, moving over 30 million copies globally.

Appetite features such indelible tracks such as the No. 1 single "Sweet Child O' Mine," "Welcome To The Jungle," "Nightrain," and "Paradise City."

The band’s ongoing Not In This Lifetime tour has now become the fourth most lucrative tours in music history… and shows no sign of slowing down just yet. The European leg is set to kick off in June as the band rips through stadiums and topping festival bills for eight weeks, including a highly anticipated slot at their spiritual home in Donington Park –  the prestigious Download Festival on Saturday 9th June 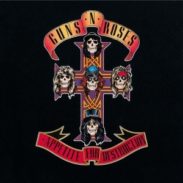