Leeds, England’s Higher Power have announced their signing to Roadrunner Records and their label debut LP, 27 Miles Underwater [album art / tracklist below].  The five-piece, who have earned acclaim for their distinctive merger of grunge, hardcore and funk, have also shared the album’s lead single “Seamless” which is streaming now.

Vocalist Jimmy Wizard detailed the new track explaining, “’Seamless’ was one of the last songs we wrote for the record. It came together so naturally, we knew from the moment we wrote it that it was going to be the first song we release. It perfectly encapsulates everything the record is about in a short catchy heavy song."

Comprised of brothers Jimmy Wizard (vocals) and Alex Wizard (drums), Louis Hardy (guitar), Max Harper (guitar), and Ethan Wilkinson (bass), Higher Power quickly established themselves as a crossover force with their self-titled three-song demo in early 2015.  Bucking trends and forgoing boundaries, word of the group’s NYHC inspired grooves and positive expression quickly spread throughout England.  Space to Breathe, a three-song 7-inch, followed in August 2015 stacking layers of social consciousness and progressive intellect on top of the band’s trashing compositions.  Higher Power’s full-length debut, Soul Structure, arrived in 2017 to critical acclaim on both sides of the Atlantic, as their post-genre approach filtered hardcore through a sonic spectrum of funk, rap, rock and psychedelia.  An unrelenting live act, Higher Power have been embraced for their euphoric performances on tours alongside Turnstile, Angel Du$t, and Knocked Loose. 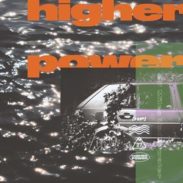