Richie Sambora, legendary rock musician and founding member of Bon Jovi, releases Aftermath of the Lowdown, his third solo album, on physical, digital and Direct To Consumer platforms, via Warner Artist Services on 17 September, 2012. In a departure from his previous major label releases - Undiscovered Soul (1998) and Stranger In This Town (1991) - Sambora has returned to his

music roots, creating a highly personal album that is both raw and powerful. The first single, “Every Road Leads Home To You,” is available now on www.richiesambora.com .

Aftermath of the Lowdown is Sambora laid bare, he makes it clear that he hasa story to tell and that the songs are deeply personal. Lyrically, he’s pulling no punches: “This is the truth, the lowdown,” he says. “And after you speak that truth, there’s always an aftermath.”

The 11 track album has been created with Sambora’s longtime friend, producer and songwriter, Luke Ebbin: this collaboration gave him the artistic freedom to compose a more personal collection of songs than the stadium-filling chart monsters that made him famous: “This is my favourite record I’ve ever made,” says the 2009 Songwriters Hall of Fame inductee. “It’s the most fulfilling and

beautiful experience in my life as a musician.”

Aftermath of the Lowdown, his first album in 14 years, has all of the gutsy spirit, soaring guitar parts and rousing melodies that make Sambora a music icon. Lyrically, he tackles the universal tribulations of divorce, substance abuse, single parenthood, independence and self-reliance. “A lot has happened in my life over the last ten years, personal stuff that’s cathartic for me to get out,” says Sambora. “Really things that could happen to anybody, but I just happened to be in a band with the biggest concert tour in the world, and in the glare of the public eye.”

Sambora has spent almost three decades as an integral part of one of the world’s most beloved bands. He’s created some of the most instantly recognisable guitar sounds and penned many of the greatest rock anthems in a generation. In 2010 – twenty-six years after releasing their first album - his band were named the top touring act in the world for the second time, a feat only previously accomplished by The Grateful Dead and The Rolling Stones. And, after playing to over 35 million people around the globe, Sambora returned home and devoted himself to writing the new album.

Full tracklisting is as follows:

1. Burn That Candle Down

2. Every Road Leads Home To You

3. Taking a Chance On The Wind

7. Always Walk Beside You

9. Learning How To Fly With A Broken Wing 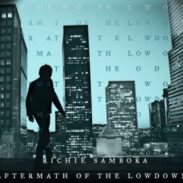