Multi-Grammy Award-winning and Rock and Roll Hall of Fame guitarist Carlos Santana has announced today that his star-studded, masterful new album, Blessings and Miracles, will be released worldwide via BMG on 15th October 2021.

Blessings and Miracles is one of the most ambitious, inspired and magical albums of Santana’s storied career, on which the legendary guitarist aims higher than ever. “The title of this album comes from my belief that we’re born with heavenly powers that allows us to create blessings and miracles,” Santana says. “The world programs you to be unworthy of those gifts, but we have to utilize light, spirit and soul – they’re indestructible and immutable. Those are the three main elements on this album.”

‘Move’ came about very much like how ‘Smooth’ happened,” Santana recalls. “It was like divine intelligence behind the scenes, and I just knew I had to record it with Rob. The song is about awakening your molecules. Ignite and activate yourself – you know, move. When Rob and I work together, we have a sound that’s splendiferous.”

Santana is one of the bestselling artists of all time, with over 47 million records sold in the US alone, and totalling over 100 million worldwide. 14 out of 25 albums have charted in the US Top 10, as well as multiple UK Top 10 albums in addition to multiple gold and platinum certifications. Santana also ties the record of most Grammy Awards won in one night – six – tied with the one and only Michael Jackson

force behind artistry that transcends musical genres and generational, cultural and geographical boundaries. To date, Santana has won ten Grammy Awards and three Latin Grammys, with a record-tying nine Grammys for a single project for 1999’s Supernatural (including Album of the Year and Record of the Year for “Smooth”). He has received the Billboard Century Award (1996), was ushered into the Rock and Roll Hall of Fame (1998), received the Billboard Latin Music Awards’ Lifetime Achievement honour (2009), and was the recipient of the Kennedy Center Honours Award (2013). Among many other distinctions, Carlos Santana has been cited by Rolling Stone as #15 on their list of the “100 Greatest Guitarists of All Time” and has joined the Rolling Stones as one of only two bands to have an album reach the Top 10 in every decade since the 1960s. In 2018, he released his first Master Class, and recently celebrated three epic milestones –the 20th anniversary of his groundbreaking album Supernatural, the 50th anniversary of his legendary performance at Woodstock, and the 50th anniversary of his masterpiece Abraxas. His most recent album, the powerful, energy-infused Africa Speaks (2019),inspired by the sounds and rhythms of Africa, was called his “best record in decades” (NPR) and was ranked among "the fiercest albums in Santana’s 50-year career” by The New York Times 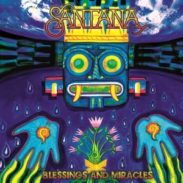