Welsh rock band Scarlet Rebels have released their incendiary new single ‘Storm’, which takes aim at the current political ruling class and questions whether people are prepared for the aftershocks of both the pandemic and this government’s high-level malfeasance.

It is taken from their upcoming album See Through Blue, which will be released on January 28th 2022 via the legendary Earache Records.

‘Storm’ is a blazing call to arms amplified by full throttle rock ‘n’ roll. Bursting with fiery riffs, slick licks and stacks of adrenaline-surging attitude, it also highlights the importance of togetherness when faced with adversity, enabling us to endure the darkest moments when we’re unified.

Speaking on the single frontman Wayne Doyle explains, “In my head I was questioning the decisions and actions of Boris and co in where they were steering us as a country. It seems to me like they’re making decisions on our behalves that answer the immediate questions being posed, but are just kicking the can further down the road expecting someone else to resolve the bigger issues.

“Brexit was sold to the nation as taking back control, but does anyone know what we’re taking control of? Or are we making it up as we go along? I fear that by the time we know the answer, the nation will be massively worse off. The video captures that fear and worry, and also brings to life the propaganda that we’re swallowing every day, unaware… It’s healthy for people to question everything.”

Scarlet Rebel’s sound is as broad as their ambition. The five-piece fuse the rocket-powered energy of classic hard rock bands such as Guns N’ Roses and Aerosmith with the vital modern edge of alt-rock giants like the Foo Fighters, all the while mining the same seam of timeless, vivid songwriting as Tom Petty and Bruce Springsteen.

Yet few British ‘rock’ bands are brave and bold enough to tackle the real-life political and social problems that Scarlet Rebels do – especially when they’re as potentially divisive as the ones they are writing about. In fact, the band channels the same political fire as the likes of Idles, Sleaford Mods or Slaves have done in recent times, more so than their hard rock brethren.

With their proud socialist beliefs, born of their South Wales roots, and unafraid to point out the rank hypocrisy, corruption and incompetence of our current government, they rage against the terrible damage the political right have done to the social fabric of the UK with their xenophobic, hard Brexit agenda and mishandling of the pandemic.

It’s no exaggeration to claim that Scarlet Rebels are exactly what rock’n’roll needs right now. 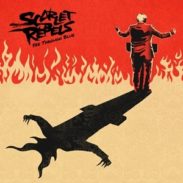