Shaman’s Harvest and Mascot Records have announced the global release of Red Hands Black Deeds on July 28. Produced by Keith Armstrong, the new album premeditatively took on a more organic approach, utilizing vintage gear. Singer Nathan Hunt offers, “We used analog effects pedals and vintage amps. It was kind of like trying to find the melting point between Midwest and L.A. It still has the Shaman's Harvest Midwest vibe to it, but it definitely has organic L.A. written all over it." Guitarist Josh Hamler adds, “Goat toes are the new cowbells. We'd tell Keith we wanted a certain sound, and he'd pull stuff out that we never thought of, like the goat toes we used on “Blood Trophies” and "A Longer View” or sandpaper on ‘Scavengers’.” The band - singer Nathan Hunt, bassist Matt Fisher, rhythm guitarist Josh Hamler, lead guitarist Derrick Shipp, and drummer Adam Zemanek - simply didn't want to use anything digital, and when a certain effect was needed they approached the process creatively, coming up with solutions to reach a realized vision. As Hamler shares, “We had been so stuck in our way of writing and recording, but Keith had a different, more interesting approach to coming up with that sound. He really helped us find a fresh new creative path."

Red Hands Black Deeds is a darker, visceral, and more layered sound than past repertoire offered on the band’s first five studio albums. The album ranges from the ominous, haunting vibes of the title track prelude, "A Longer View," "The Devil In Our Wake," and "Scavengers" - which could fit just as easily on a horror film soundtrack as it does on this rock band's album - to quieter, more vulnerable moments as heard on "Tusk and Bone" and "Long Way Home." Lyrically, the band also ventured into new territory, taking on the current political, social, and economic struggles the USA is facing as a nation under the new administration. "Red Hands Black Deeds touches upon the darker nature inside all of us,” says Hunt. “The whole record has a contrast and push and pull tension - a juxtaposition of good and bad or questioning what is right and wrong. The record ended up having a concept, though we weren’t intending it to," says Hunt.

The writing of the record began in November 2016 at the time of the US presidential election, so it's no wonder there are social and political undertones to many of the songs. "The tension in the record kind of speaks for itself. There's a dark anxiety, tension-filled feeling that reflects what’s going on in the world," says Hamler.

"The Come Up," the album’s first single, is an upbeat song that juxtaposes a Motown backbeat with classic Rolling Stones rock and roll swagger, and that delves into depression. "There's so much negativity on social media today ‑ a lot of people struggling with real issues and with where we're at as a nation," says Hunt.

But, "The Come Up" is also an acknowledgment of the singer's own battle with depression. "It's therapeutic for myself," he says. "It's just about sometimes when you just can't change shit, you got to realize you can't mold everything in your life and you kind of just have to roll with the punches," says Hunt, who overcame throat cancer in 2014 that could've derailed the band, but didn't.

"A Longer View" is a song that touches on civil unrest we face today and global race issues. "When you step back, you see we're all just humans. That's the longer view. It doesn't matter. At the end of the day, we all just want love and to be understood," says Hunt.

On a similar note, "The Broken Ones" touches on immigration issues, as well as anyone who feels disenfranchised, such as Hunt's own Native American ancestors. "My father's family is part of the Lumbee Tribe of North Carolina, which is made of a lot of different races and regions, and because of that they don't get all of the benefits that federally recognized tribes have. The song is a cynical look at society today," says Hunt, whose heritage inspired the band's name.

"The Devil in Our Wake" tackles the topic of war. "I'd go to bed with CNN on to some bullshit at the White House, or the heartbreaking situation in Syria. I'd see what's going on in the world and think, 'Shit, how did we get so divisive?'" says Hunt.

"Soul Crusher," a funky rocker about fighting through tough times, shows off the band's musical versatility. "It mixes a lot of genres musically. You can’t help but want to dance and bob your head. It touches on that old Motown vibe. But it also has some Texas blues to it," says Hunt.

Even through the singer's battle with cancer, and other trials and tribulations every band goes through, the band has persevered. Born in Jefferson City, Missouri, Shaman's Harvest released their first album, Last Call for Goose Creek in 1999, followed by Synergy (2002) and March of the Bastards (2006) before having their break-through moment with 2009's Shine. Shine featured the standout track, "Dragonfly," which hit #9 on Billboard's Heritage Rock chart and #15 on the Mainstream Rock Tracks chart. It was also featured on the soundtrack to the major motion picture, Legendary, and the video has garnered more than 4.5 million YouTube views.

The band followed that success with their Mascot Records debut, Smokin' Hearts & Broken Guns in 2014, which has garnered more than 31 million streams. The album's "In Chains" peaked at #11 on the Media Base chart after a run of 22 weeks at Active Rock radio. It also spent over four months in the Top 10 of iTunes Metal Songs Chart. The song's video has more than 3 million views on YouTube, while the band has a cumulative 8 million YouTube views.

Shaman's Harvest has had equal success on the touring front. They've toured or shared the stage with major artists like AC/DC, Alice In Chains, Godsmack, Breaking Benjamin, Seether, Nickelback, Three Doors Down, In This Moment, Daughtry, Cheap Trick, Theory of a Deadman, Hinder, and others, and played major festivals like Rocklahoma, Rock on the Range, Rock Fest, KRockathon, Rockin' The Rivers, Texas Mutiny, Rock Carnival 2016, High Elevation Rock Festival, and Midwest Rock Fest.

The key to the band's longevity is threefold: Staying in Missouri, which gives the band a Midwestern authenticity. "Our music wouldn't be what it is if we weren't from a hillbilly kind of a state," notes Fisher. Second, knowing the gift of distance and being open to change. "It's been 21 years for us," Fisher continues, "so it's a brotherhood and there are fights, but I think over all it's just keeping some distance in between tours when we need it."

And, third: "Growing musically as a band each time. I think this record, with how differently we approached it and how we expanded our sonic palette, is a good step toward a new future for us," adds Fisher. 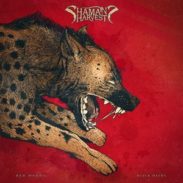