The Damned – the greatest surviving British punk band  – are back with ‘Evil Spirits’, their eleventh studio album, still firing on all cylinders, and breaking all the rules. Where their peers either burnt out, or faded into mediocrity, this most spiritually chaotic of all punk groups have never surrendered their ideals, always forged onwards.

This time, they’ve collaborated with Tony Visconti, producer of innumerable classic albums by David Bowie, T-Rex and more, who’d first heard of them from Marc Bolan in ’77, and was shocked they’d never approached him before.

Lifelong fans and newcomers alike will be blown away by the sheer quality of ‘Evil Spirits’: there’s hurtling Scott Walker-esque chamber pop (‘Standing On The Edge Of Tomorrow’), and Farfisa-stabbing garage-psych (‘Devil In Disguise’), while madcap polemicist Sensible serves up unforgettable tunes like ‘We’re So Nice’, his swingeing critique of Blairite imperialism.

Says the Captain, “The songs are mostly a reaction to the lunacy of today’s nonsensical politics. I started buying records in 1967, the Summer of Love. There were so many positive changes happening back then – civil rights, feminism, the anti-nuclear demos. Whatever happened to the beautiful hippy dream of worldwide peace and love?” 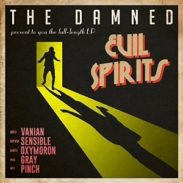