Off the beaten path, beyond the hills, and tucked out of sight, creativity flourishes.

Whether it be on the banks of the Mississippi River or deep in the heart of the English countryside, rock ‘n’ roll lives, breathes, and burns on the outskirts. Hailing from Rome, GA at the foothills of the Appalachian Mountains, The Georgia Thunderbolts rise up with a scorching signature style steeped in soulful southern swagger, blistering blues, and raw rock. On their self-titled debut EP for Mascot Records, the quintet—TJ Lyle [vocals, harp, piano], Riley Couzzourt [guitar], Logan Tolbert [guitar], Zach Everett [bass, harmony vocals, keys], and Bristol Perry [drums]—conjure a tried-and-true spirit through a fresh fire.

“We’re going for that timeless and classic sound with a modern twist and newer attitude,” exclaims TJ. “We’ve got a real hunger and eagerness to play.”

“We all grew up on rock music,” Riley adds. “Rock ‘n’ roll comes back around, but longevity depends on grinding it out. That’s what we want to do. We try to put in the work our favorite bands did. If I could think of three words to describe us, they would be ‘Hardworking, Determined, and Humble’.” Bristol grins, “If I could think of three words, they would be ‘Rock And Roll’.”

Bristol and Riley initially bonded over those three words in high school. As their football teammates blasted rap through the locker room, they discussed the merits of metal and hard rock. By sophomore year, the musicians had locked into a regular jam schedule eventually joined by Zack. In 2015, they ended up on stage alongside TJ for an impromptu jam at an open mic. TJ soon found himself at band practice as well. Inviting Logan into the fold, the lineup of The Georgia Thunderbolts officially cemented. The musicians shared a wide swath of inspirations, ranging from southern gospel to Hank Williams, Jr., Neil Young, Little Feat, Waylon Jennings, Barry Waldrep, and Merle Haggard to Ozzy Osbourne and, of course, Lynyryd Skynyrd.

Gigging tirelessly, they cut their teeth by playing with everyone from Black Stone Cherry and The Kentucky Headhunters to Blackberry Smoke. Mascot Label Group President, North America Ron Burman caught one gig and immediately signed them.

Burman comments, “Growing up in Jacksonville, Florida, I have a strong affinity for great southern rock. When I first heard The Georgia Thunderbolts, I was immediately drawn in by their powerful, authentic, bluesy, and southern-flavored rock and great songs. Then, I went to see them play in Nashville at The Basement, and I was blown away. I literally had goosebumps and knew we had to sign them. The singer TJ has such a distinctive vocal range and style, and they are such a strong rock band. I expect great things to come from them.”

Shortly after, they hit the iconic Barrick Recording Studio in Glasgow, KY to record with producer Richard Young. The resulting EP comprises five undeniable anthems, beginning with the opener, “So You Wanna Change The World,” a bluesy blend where soulful vocals resound over clean guitar as TJ signals a heartfelt lead by urging Riley, “Go ahead now!”

“It’s a universal song we all felt strongly about,” explains Riley. “In terms of the message, it’s about looking for better days, finding a way to help yourself and those around you, and everybody coming together and trying to make a change in the world. It’s something we can all look forward to.”

The Georgia Thunderbolts examine their journey thus far on “the first song we ever wrote” the dynamic “Looking For An Old Friend.” The seven minute-plus “Set Me Free” rolls from a hummable riff towards evocative soloing and an epic final crescendo with TJ’s final howl, “Movin’ on.” Meanwhile, “Lend A Hand” stomps along on a wild lick before a sweeping and soaring refrain, “Lend a hand when you feel down.” Once again, they practically set the fretboards ablaze.

In many ways, “Spirit of the Workin Man” doubles as a calling card for the band. Robust distortion gives way to fluid guitar leads and a howling hook.

“That’s our anthem,” smiles TJ. “It’s got a deep lesson to it. You can’t knock down the little man. Everybody has a say-so. You strive to do better, persevere, and pull through hard times, if you have a strong faith and spirit.”

“I relate the song to our band as a whole,” Riley elaborates. “We all grew up humble. We’re still humble. We’ll always be humble to the end. We were raised right to be five working men. It’s who we are.”

In the end, by being who they are, The Georgia Thunderbolts rustle up a new era of rock ‘n’ roll.

“There’s a message to what we’re doing,” Bristol leaves off. “It’s okay to be yourself. If you’re going through hard times, the music will always be there. We’d love to remind everyone of that.”

“In Georgia, you hear Lynyrd Skynyrd, The Allman Brothers, and all of the greats everywhere,” Riley and Logan conclude. “Rock and roll is something that comes naturally for us. We love it and are in it for the long haul. We feel like we can bring it back.” 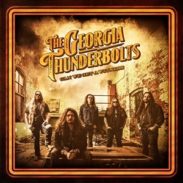