The Welsh quintet have gone from strength to strength since achieving an official UK Top 15 Album with their previous album, their sophomore release 'Point Of No Return' [2020] (an album highlighted as one of Classic Rock Magazine's 'Top Albums of 2020'), receiving honours such as nominations for Best British Band and Best British Single as part of Planet Rock Radio's The Rocks 2022 awards, and Bridgend Mayor's Annual Citizenship Award in recognition of bringing their hometown community together via their popular weekly videocast CrowCast.

In between performing on the main stage at Download Festival 2022, selling out headline shows at the likes of Cardiff Castle, and playing German TV channel WDR's prestigious Rockpalast Crossroads festival, Those Damn Crows recorded 'Inhale/Exhale', an album that elevates their signature hard-hitting rock to dizzying heights. 'Inhale/Exhale' whips up a storm of atmospheric hard rock that sees Shane's trademark rousing lyricism, delivered by molten-smooth melodies and ever-passionate emotion, backed by drummer Ronnie Huxford's earth-quaking percussion, guitarists Ian “Shiner” Thomas and David Winchurch's twin-attack of rampaging riffs and glacial auras, and bassist Lloyd Wood's juddering bass thunder. Those who show up in hope of the band's highly esteemed anthemic, piano-based balladry will also not be disappointed.

Frontman Shane Greenhall discusses how the Crows have flown even higher with 'Inhale/Exhale': “'Inhale/Exhale' is a real combination of both Crows albums to date, but with a real sense of production elevating and evolving what we’ve done on past Crows records. No matter what song you decide to play, whether it's one of the many hard hitting songs or a softer piano-based song, there’s something there in the distance, lingering, a sonic sense of connection, if you will. I'm not sure that we’ve had that on our other records.”

Producer Dan Weller (Enter Shikari, Monster Truck, Bury Tomorrow) and mixer Phil Gornell (Bring Me The Horizon, 5 Seconds Of Summer, You Me At Six) were the team behind helping the band in capturing  this next level of their evolution. 'Inhale/Exhale' was recorded at both the picturesque Vada Studios (built within a 13th Century chapel amongst 20 acres of beautiful rural Warwickshire) and within the beating heart of their homeland Wales at Giant Wafer Studios.

Shane shines a light on the concept from which the album grew: “The album is talking openly and honestly about how we react as individuals to our life's surroundings and experiences. Have you ever noticed when you experience an emotion that your breath changes? We all must learn how to breathe in certain scenarios.”

He continues: “Anxiety, stress, mental health issues, and our learned behavioural patterns dictate how we live our lives and the choices we make. We can very quickly fall and spiral and focus into a sense of unknowing, triggered by insecurities. But life is all about the unknowing - it’s literally the essence of life and what makes it so precious. We’re all guilty of looking forward and focusing on the ‘bigger picture’ scenario sometimes. But when life throws you a curve ball and temporarily places you into panic mode, that's when we learn the most about ourselves: to be present and think small, to focus and think about what we CAN control... our breathing!”

Shane concludes: “How we respond is sometimes more important than how we react in those unpredictable scenarios. We can all breathe, but how we breathe and the manner in which we inhale, exhale can literally change how we feel in that moment.”

The album's artwork embodies this concept and the title's duality, presenting a ribcage with one desolate, blackened side and one side brimming with vibrant life. Shane explains the thought behind the cover: “The rib cage is the protector of our respiratory system. When we were talking about the album name it seemed the perfect visual representation, where we could portray life and death starting and finishing via the artwork.” 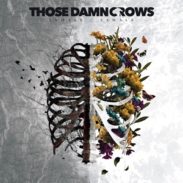