One of the most popular and enduring British rock bands of the last 25 years, with 18 Top 40 singles in the UK and a string of gold and platinum albums around the world, Thunder are set to release their landmark tenth studio album, ‘Wonder Days’, on earMUSIC on February 16th 2015.

The group’s first studio album in six years, ‘Wonder Days’ reminds us why Thunder are now more revered than ever before. With a lineage dating back to the cream of hard rock – Led Zeppelin, Bad Company, The Who and Deep Purple and songwriting greats such as The Kinks, The Beatles and The Faces – the band’s sound is a timeless marriage of unforgettable melodies and sheer rock power. Their long-awaited return with ‘Wonder Days’ should ensure that Thunder are elevated to their rightful place in the pantheon of truly great British bands.

In parts a rumination and reflection on the dreams and desires of young men growing up in the 70’s that inspired the band members to form their first band in their early teens, Wonder Days’ is also a potent mix of blues, soul and rock’n’roll that is as contemporary as it is steeped in the finest music of the last few decades.

From the epic Zeppelin-esque title track, through the no-holds-barred pop prowess of potential hit singles ‘The Thing I Want’, ‘Resurrection Day’ and ‘Black Water’, to the big-screen ballad ‘Broken’, Thunder have delivered one of the finest rock albums of recent years.

While the galloping drive of ‘The Prophet’ comes on like an unholy union of Iron Maiden and Whitesnake, the sensual ‘Serpentine’ drips with an archaic Deep South blues vibe before turning into a Royal Blood meets The Raconteurs style stomp. ‘Chasing Shadows’ has all the swagger of primetime Aerosmith while the affecting, mandolin-driven folk tinges of ‘The Rain’ sounds ethereally ageless.

Throughout the album Danny Bowes’ vocals showcase just why he is one of the greatest rock vocalists of his generation; a true foil to guitarist Luke Morley’s powerhouse riffs, scintillating melodies and delicate acoustic strumming.

Though making a good recovery from the tonsil cancer that excluded him from the band’s recent live appearances, rhythm guitarist Ben Matthews has been sadly absent from the sessions so Morley has taken charge of all the guitars and keyboards on the album, with the ever-present Garry ‘Harry’ James on drums and long-term bassist Chris Childs on bass providing the striking rhythmic back-bone to the band.

Recorded at the legendary Rockfield Studios in Monmouth, with Luke Morley reprising his role as producer, the album was mixed by the renowned Mike Fraser, whose CV includes such names as Aerosmith, AC/DC and Metallica and who worked on several of the group’s key early records including their celebrated debut, ‘Back Street Symphony’.

Thunder hit the road in March with dates in Leeds, Birmingham and London, with Reef and Tax The Heat as support. 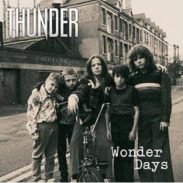