Pop-rock masters We The Kings, led by vocalist/guitarist Travis Clark, is being mindful to keep their ‘Sunshine State of Mind’ and look at the silver lining while navigating 2020’s uncharted waters. The Florida quintet has announced the release of their new single “These Nights”, which is available now via S-Curve Records/BMG

While the band typically pens songs about subjects like being a hopeless romantic, “These Nights” leans into Clark’s mixed emotions around not being on the road. “I really miss being at shows with my best friends and being around others with a shared love for the live experience. Despite that, this is probably the best time to write new music.”

We The Kings have also been in the studio working on music to be included in their upcoming EP ‘SAGA’, which is being targeted for release in early 2021. “These Nights” may be the answer for many We The Kings fans hoping for that Self-Titled era sound but will still showcase their progress since 2018’s full-length ‘Six’. “Despite all the circumstances, we are thankful for the time to be with our family and know we owe it to the fans to deliver new music” says Clark. “Not only is this our therapy and outlet, but we understand that there will be those who will appreciate something fresh from the band.”

We the Kings exploded onto the music scene in 2007 with the release of their self-titled debut, producing singles like “Check Yes Juliet” and follow-ups including “Sad Song,” “Heaven Can Wait,” “We'll Be A Dream (feat. Demi Lovato)” and Say You Like Me. Over the course of eight albums, EPs and countless singles the band has built a loyal fan base, leading to packed tours, festivals and worldwide tours with sold out dates celebrating 10 years of their self-titled debut in 2017. 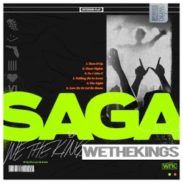